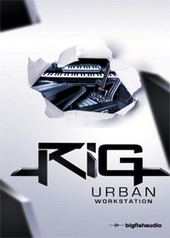 Big Fish Audio has been the industry leader in creating modern and edgy Hip Hop sample and loop libraries for years. At long last the perfect tool to get any amateur or seasoned Urban music producer the sounds they need for top of the line music production is here in RiG: Urban Workstation. Big Fish Audio has joined forces with the engineers at Vir2 to create a virtual instrument tailor-made for the hip hop and R&B producer. You don’t have to weed through instrument after instrument to find the right sound since each instrument in RiG has been recorded and edited to create instant inspiration for you, the modern producer.