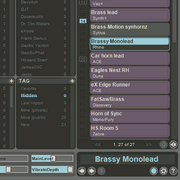 Big Tick Audio has released version 1.5 of Zen, the a universal presets manager for Windows and Mac.

The biggest change was the creation of a core library, mostly because I am starting to have requests from companies who want to license the Zen engine (database searches + online synchronization) to build their own preset browser.

Zen is available for Windows and Mac as freeware.