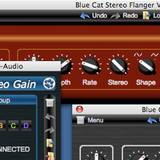 Blue Cat Audio has released a new version of the Blue Cat Freeware Pack, a collction of free audio effect plug-ins for Windows and Mac.

The Blue Cat Freeware Pack is available to download as freeware for PC and Mac (plug-ins are available as separate downloads as well).