Oleg Mikheev aka GrayWolf has announced BlueArp, a MIDI arpeggiator plug-in for Windows. 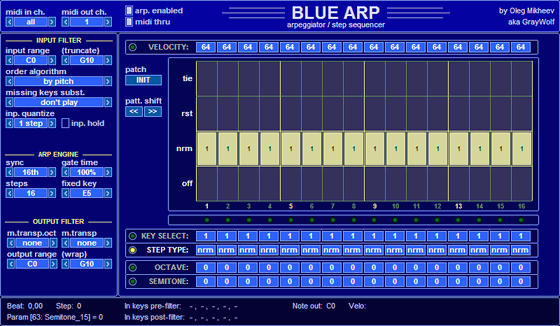 The BlueArp MIDI arp / step sequencer plug-in designed for use in electronic music.

BlueArp is to be used as a VST instrument, but it doesn’t generate any sound itself, it generated MIDI messages, so it should be connected to another synth, hardware of software.

To connect it to another VST Synth, set BlueArp’s MIDI output port to the same number as the VST Synth’s MIDI input port (use any port not occupied by real MIDI equipment).

BlueArp will work only when the sequencer is running (PLAY pressed). When stopped, it will only pass the notes thru.

The BlueArp beta for Windows (VST) is available to download at no cost.