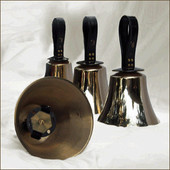 Version 2 of this unique 2.4 gigabyte sample library has doubled in size since version 1 was released in November of 2009.

Three more octaves of Handbells as well as 2 new articulations (Mart and Mart-Lift) have been added. On the low end, C2 and G2 bells as well as the octave above that (C3 – B3). On the high end we have added bells C7 – C8. And to round it off, a very flexible user interface with KSP scripting has been created by Bo Clausen.

Handbells V2 for Kontakt 3 or higher is available to purchase for the introductory price of $119 USD through January 1, 2011. Current owners of the Handbell V1 library can upgrade to V2 for $40 USD, also until January 1, 2011.