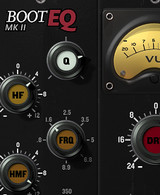 Bootsy has posted some more information on the forthcoming BootEQ mkII, the successor of the BootEQ equalizer plug-in.

BootEQ mkII is basically the further improved and reworked successor of the already known and popular musical mixing EQ.

BootEQ mkII should be available in first half of February, as a VST effect plug-in for Windows (SSE compatible) PC.