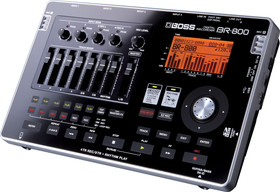 BOSS has announced the BR-800, a complete portable music-production solution.

The sleek new design is made possible by touch-sensor switches and SD-card recording media. Up to four tracks can be recorded or eight tracks played back simultaneously, plus an additional stereo track dedicated to the built-in rhythm generator.

Whether you’re creating intricate, multi-layered songs or point-and-capture field recordings, the BR-800 makes the recording process fast and easy. Beginners will love the new EZ Recording mode that interactively guides you through the recording process. Other helpful features include the convenient RETRY function, which re-cues automatically to fix mistakes, and SONG SKETCH recording for instant, one-touch capture. There’s also a built-in stereo condenser microphone, plus a DR-880-quality rhythm generator for adding drum and percussion tracks to your songs.