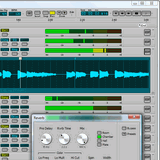 The new release includes a General MIDI compatible instruments collection called MultitrackStudio Instruments. The MultitrackStudio Instruments are fully modeled, they don’t contain any samples. This allows for randomizing many parameters which helps reducing machine gun effects. It also allows for fast load times and a small download size. The 6.3 version download is still under 4 MB. Audio demos are available at www.multitrackstudio.com. The electric guitar sounds use the Guitar Amp effect which appears in the Pro Plus edition only.

The update is free for users who purchased MultitrackStudio after October 1, 2009. Upgrades for older versions are $39 USD (Pro Plus) / $23 USD (Professional).