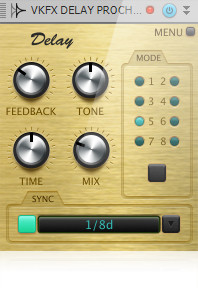 Cakewalk has announced that a purchase of SONAR X3 Studio or Producer through November 30, 2013, comes with a free Delay effect module for ProChannel from Overloud.

The FREE VKFX Delay module harkens back to the days of tape echo. The original tape echo effect was created by recording an input signal to tape via a tape head and then replaying that signal through another tape head. By placing several heads at different distances along the tape path, they were also able to create different syncopations of delay depending on which heads were monitored.

One feature of tape delays which was lost in the digital move forward was the effect on the sound of the tape itself. In tape delays, the signal is delayed by keeping it on the magnetic tape for a time. For every repetition of the delay, the signal is recorded to and played back from the tape. The more repetitions, the more intense is the effect of the tape on the sound.

The VKFX delay utilises an intelligent tape simulation algorithm which reproduces both the compression effects and frequency response of analogue tape for each repetition of the delayed signal.

All customers who have purchased and registered SONAR X3 Studio and Producer qualify for the free download.