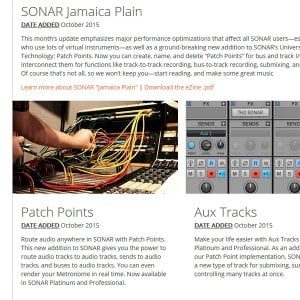 Cakewalk has announced the release of SONAR Jamaica Plain, the latest rolling update for the music production software for Windows.

And now, SONAR’s Universal Routing Technology gets another big boost with Patch Points—route audio from track to track, feed buses and sends to tracks, split and merge audio, discover new recording and playback workflows, do easy parallel and multiband processing, and much more. Additional optimizations give a super-smooth SONAR experience for big projects and virtual instruments, while more fixes keep tightening up SONAR’s core. To top it all off, the best SONAR yet is only a download away—with even more to come.

The download is now available from the Cakewalk Command Center.