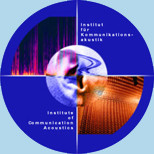 Christian Borß from the Institute of Communication Acoustics (Ruhr-Universität Bochum, Germany) has announced the release of HybridReverb, a stereo reverberation effect plug-in for Windows.

The concept behind HybridReverb is to use a set of pre-defined presets which are suitable for different use cases. Each preset defines a fully-meshed filter network with two input and two output channels. The presets which are included in HybridReverb are based on room impulse responses which have been synthesized with tinyAVE, an auralization software which was developed at the Institute of Communication Acoustics, Ruhr-Universität Bochum (Borß and Martin, 2009).

HybridReverb is available as a freeware (GNU General Public License) VST effect plug-in for Windows PC. The included room impulse responses (presets) are property of the Institute of Communication Acoustics, Ruhr-Universität Bochum, and are free for non-commercial use.

The source code for HybridReverb is available for download as well.