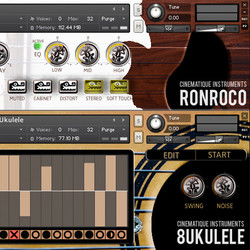 The Ronroco is a stringed mandolin like instrument of the Andean regions. It has a sound box traditionally fashioned from the shell of an armadillo or tortoise, now often made of wood. It typically has 10 strings in five courses of 2 strings each. Primarily played in traditional Andean music, today, it is often to be heard in the music of Gustavo Santaolalla.

As a bonus we also recorded a soprano Ukulele which was manually customized from a four to eight string version.

Ronroco for Kontakt is available to purchase for 27 EUR. The version 1.1 update is now available to download to Ronroco users.

IK Multimedia Virtual Instrument Group Buy – Buy at 50% off, get 3 for free