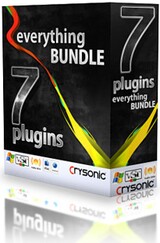 Crysonic has announced a limited time promotional offer on its CryEverything Bundle, a collection of effect plug-ins.

Four of the plug-ins in the bundle are available for both PC and Mac the others are PC Only (Mac OS versions will be free upgrades when they are released). The No-Brainer Bundle Deal can now be purchased from the Crysonic website www.crysonic.com until the 26th of May 2010