Dave Smith and Roger Linn have announced the Tempest, a new analog drum machine, introduced at the 2011 NAMM Show. 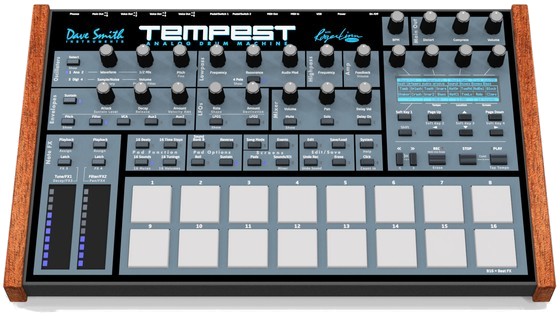 Tempest is a collaboration between Smith and longtime friend and fellow instrument designer Roger Linn. Though they’ve consulted with each other on past projects, Tempest marks the first time a product will carry both the Dave Smith Instruments and Roger Linn Design logos. “If you’re going to make a drum machine, who better to have in your corner than Roger Linn?” said Smith, referring to Linn’s legacy as inventor of the digital drum machine.

Though Smith is also responsible for some fine drum machines—most notably Sequential’s DrumTraks and Studio 440—Tempest is his first to utilize analog synthesis to generate the sounds. “We’ve designed a very flexible new synth voice for Tempest,” said Smith. Linn added, “The design of Tempest reflects a rethinking of what a drum machine needs to be in the current era. It’s not so much a drum machine as a new musical performance instrument for the creation, manipulation, and arrangement of beat-oriented music, with an intuitive and efficient use of human gestures.”

Tempest’s 16 velocity- and pressure-sensitive pads are arranged in an 8 x 2 array to facilitate both real-time and step entry of beats. Two pressure- and position-sensitive Note FX slide controllers provide a unique new method of performance and control.

“We’re very excited about Tempest,” said Smith. “It’s an instrument with a lot of personality and it’s great fun to play. It has been a long time since there has been anything new in the drum machine world.”