The microphone choices were many, but the chosen were very few, with the Lauten Audio “Eden” tube microphone featured on Crosby’s lead vocals. The album was produced by multi-instrumentalist Michael League of Snarky Puppy fame and co-produced, recorded and mixed by Fab Dupont. 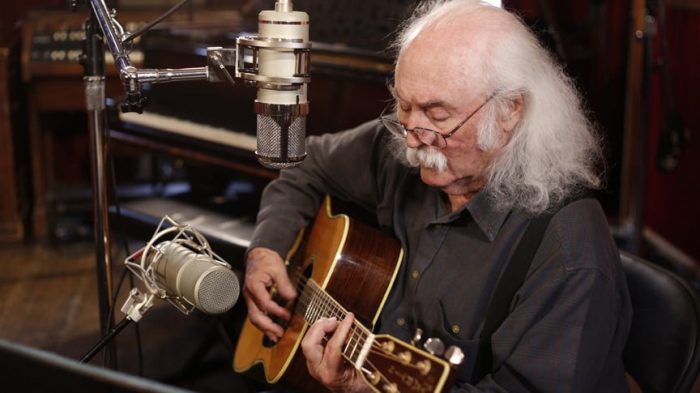 Dupont, commenting on the vocal mics used in the ‘Lighthouse’ recording sessions said, “There was the Eden, which is all the lead vocals, and all the lead harmonies were done with the Eden. The Eden is the sound of the vocals.” David Crosby added, “With the Eden mic, Fab Dupont was able to capture the best vocal sound I’ve ever had in my entire career.”

When asked how the lead vocal mic was chosen out of Groove Masters’ vast vintage mic selection, Dupont elaborated, “Basically what happened is David didn’t know me, Michael brought me in, and so on the first day David sees the Eden and is like, ‘What’s that?’ He says, ‘I record here all the time. There’s microphones here I love. I want to use those,’ and I said, ‘Okay, cool, no problem. I’ll put those up, but would you mind trying this one? Because I think you’d like it.’ He said, ‘Okay, sure, because, you know, why not?’ I asked the assistant, I said, ‘What’s David’s favorite mic here?’ and that’s how the [Neumann] U 47came up. Then, I took the 47 that was his favorite 47 from all the vintage 47s in this 47 museum and then put the Eden up and recorded him singing into both, and then he picked the Eden. That’s how the Eden became the microphone for the record.”

“David, who has no allegiance to anything, just immediately loved the Eden right away,” Dupont adds, “wanted one for himself immediately, and he has choice, you know? He can do whatever he wants. Yeah, there is something very special about that mic on vocals.”

Describing his sonic ideas as co-producer and engineer on the album, Dupont reveals, “I have a certain idea of how music should sound to make me happy-and Michael League and David Crosby had a very clear idea of what they wanted to do. Since they decided to not put any drums on the record that allowed me to do whatever I wanted. After going back and listening to David’s old stuff and more recent stuff, my vision was to do something extremely pure, to focus on the lyrics and the picking on the guitars.” Lauten Audio’s Atlantis FC-387 microphones were also used to record acoustic guitars in combination with vintage microphones.

Dupont continues, “What I wanted to try and achieve is get all the good stuff from the old recordings, which is all those vocal blends and all that kind of warmth, like fuzzy tone, but without the inherent artifacts of older recording, which is this slightly distant sound. I wanted to capture the warmth and capture the blend that they had back in the day by everybody playing together. I wanted to capture something like that, but put it in a shell of super Hi-Fi HD gloss, in your face, ‘no recording’ kind of vibe. It’s a difficult balance but I think we did it.”