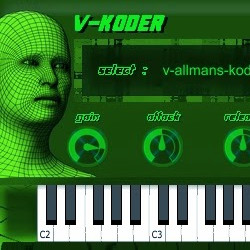 All available in an incredible tiny size, less than 1 mb!

The use of the modwheel in your midi controller add a formant-talk effect. The instrument comes with velocity sensitivity and a bunch of effects (Delay, Reverb, Lofi) available on the interface, for an easy set up.

Both libraries (and plugins) are available to download at no charge.