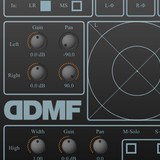 DDMF has released version 1.1 of StereooeretS, a two-band stereo field modifier for Windows and Mac.

With StereooeretS you can increase the stereo fiels as much as desired, but without losing punch in the low end from removing too much “oomph” from the center channel. It splits up the audio in a high- and a low frequency part and lets you adjust the width, gain and even pan of both bands independently! Features: can be fed with L-R as well as M-S signals. Phase of both channels can be flipped. Solo option for all bands and channels to help you hear what you are doing. Built-in stereo field analyzer to prevent phase issues.

StereooeretS is available to purchase as an effect plug-in for PC and Mac (VST/AU) for $20 USD.