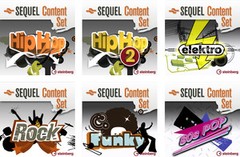 Steinberg has announced a special offer on Sequel Content Set bundles when purchasing one of Steinberg’s latest USB interfaces, CI1.

Two bundles are offered, each comprising three of the most popular Sequel Content Sets. The first bundle features HipHop, HipHop 2 and Elektro, whereas the second comes with Rock, Funky and ‘80s Pop. When registering the newly purchased CI1 interface, the buyer can select one of the two bundles on offer. Each bundle costs EUR 22.35 (includes 19% VAT) which is a saving of 50% off the regular retail price.

The Rock, Funky and ‘80s Pop Sequel Content Sets make up the second bundle which boasts more than 1,000 audio loops ideal for producing punk, rock, wave and everything in between.
“Owing to the release of our CI1 interface, we came up with the idea to run a special offer on our most popular Sequel Content Sets,” comments Stefan Schreiber, Steinberg’s product marketing manager for hardware. “This is a great way of complementing the hardware’s included light edition of Sequel,” Schreiber adds.