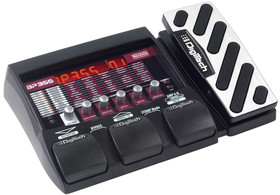 The DigiTech BP355 is ideal for practicing and rehearsing. It includes 60 CD-quality drum patterns, an audio input for a portable audio player, and a 20-second looper that players can play along with. It even has a built-in tuner.

All of the BP355’s sounds and functions are easily accessible via its straightforward control layout and three footswitches, and the BP355’s expression pedal enables on-the-fly control of volume, pitch, modulation speed and other parameters. The BP355 has a rugged, die-cast metal housing that stands up to on-stage use, while its USB connectivity and included Cubase® LE5 recording software and DigiTech X-Edit™ editing software make it perfect for home or studio recording.

The BP355 has a 1/4-inch input and 1/4-inch and XLR stereo outputs, an Amp/Mixer switch that enables connection to an amplifier or a PA system, a 1/8-inch external audio input, 1/8-inch headphones output and a USB jack. Its power supply is included. With the BP355, bass players have all the sounds they need to take center stage, with a pedal that offers more sounds, effects and versatility than ever.