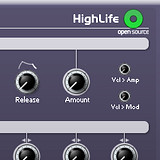 HighLife R3 now has greatly improved sfz import, more in line with the official sfz specs. Most sfz files can now be used rightaway without the need to edit out any unsupported features or moving the soundfiles around on the computer.

HighLife R3 is available as shareware for Windows PC. A license is 45 EUR / $69 USD (VAT included).