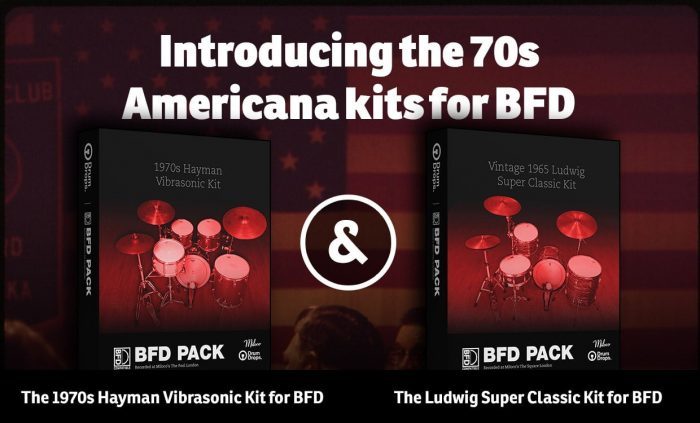 Both kits were played by drummer Tim Weller and recorded in London at Miloco’s The Square during Drumdrops’ 70s Americana recording session which resulted in the drum tracks album Route Seventy Sticks.

The Ludwig Super Classic kit includes up to 80 velocities of each articulation and totals 7740 samples. It consists of a 20in x 14in Kick, a 13in x 9in rack tom and a 16in x 16in floor tom. The snares used are a wooden 1960s 14in x 5in Rogers Dynasonic and a 1970s 14in x 6.5in Ludwig 402. The cymbals included are an early 70s Zildjian K Medium Heavy 20in Ride, a Zildjian K dark Medium 18in Thin Crash and some Zildjian K 14in HiHats. The Ludwig pack also contains 14 groove palettes which were based on drum tracks recorded for Route Seventy Sticks. These are split in 190 4-bar loops.

The 1970s Hayman Vibrasonic kit also includes up to 80 velocities of each articulation and totals 8280 samples. This kit consists of a 22in x 14in kick, 12in x 8in and 13in x 9in rack toms and a 16in x 16in floor tom. The snares are a metal shelled Ludwig 400 and a wooden Slingerland Radio King. The ride is an old Tosco 20in ride, the crash a Paiste 18in medium and the hi-hats are made by Zyn. The Hayman pack contains 11 groove palettes split into 179 4-bar loops.

Both kits will be launched on Wednesday 5 August at 4pm BST (UK time) at a retail price of £35 GBP. The first 10 purchasers of each kit will receive it for free. Customers need to have a registered Drumdrops account. After this offer is over, each kit can be purchased with 20% off using the voucher code americana20. Or if you purchase both kits you can get 40% off using the voucher code americana40. This offer is only valid for the first 200 purchases.

The drum tracks album Route Seventy Sticks will also be available with a 50% discount for one month only. This drum tracks album was recorded using both of these kits and contains 32 drum tracks available to purchase as multi-tracks, stems, loops or practice tracks. To get 50% off any of these purchases use the voucher code routeseventy50 from today.