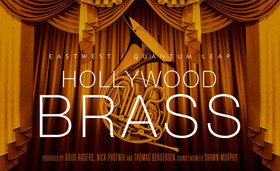 Hollywood Brass is approximately 150 gigabytes of pure Hollywood magic. A world class group of brass artists, worthy of a Shawn Murphy recording, was gathered for this brass sampling marathon which lasted for 21 straight 11 hour days followed by a year of post production.

Hollywood Brass gives you complete control over the players and includes:

But most importantly check out our articulations chart which really shows how far we went to create the ultimate orchestral brass library. No Shortcuts here!!