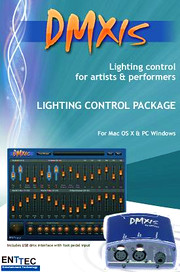 Enttec has released version 1.0.4 of DMXIS, a flexible, easy to use lighting control package, specifically designed for live performers.

DMXIS is the easy way to create exciting live light shows with your Mac OS® orWindows® based computer. DMXIS was designed specifically for live performers who want to run an automated light show while performing on stage. The hardware is incredibly easy to connect up, and the software extremely simple to learn and operate, while being flexible enough to control modern intelligent light fixtures.