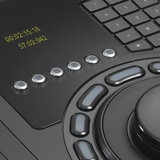 Euphonix has announced the MC Transport, a compact media controller that offers professional, hands-on control and navigation of all your favorite audio and video applications.

The MC Transport will be available in June 2009.