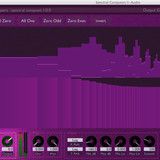 Expert Sleepers has released Spectral Conquest, an effect plug-in that lets you directly manipulate the frequency spectrum of audio signals.

The incoming signal is analysed via a FFT (Fast Fourier Transform), resulting in the familiar spectrum plot where the full audio spectrum is split into a number of narrow frequency bands. The outgoing audio is then regenerated by an Inverse FFT. The interesting bit is that the plug-in lets you modify the frequency spectrum in between.

Spectral Conquest allows you to modify the spectrum in two ways:

Spectral Conquest is available to purchase as an effect plug-in for Windows and Mac (VST/AU) for $29 USD. The plug-in is also available as part of the Ultimate Bundle for $155 USD, and the Creative Effects Bundle for $55 USD.

A demo version can be downloaded from the Expert Sleepers website. It is fully functional, except that it will time-out after 15 minutes of use. Simply reloading the plug-in resets the time-out.