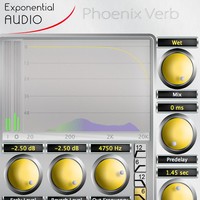 Exponential Audio has released version 1.2 of its PhoenixVerb and R2 reverb effect plug-ins for Windows and Mac.

The long wait for 64-bit Windows code is over. PhoenixVerb and R2 now support 64-bit Windows VST and Windows AAX. There are many other improvements–a better preset loader, faster startup, better performance.

If you’re already an owner, get to the download page and get your update. If you’d like to try them out, go to the demo pages and get a new 21-day demo.