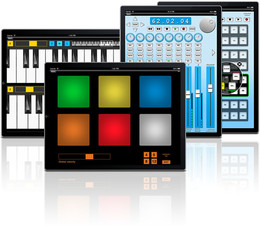 Eyosido has released eyoControl, a set of MIDI controllers for iPad.

eyoControl lets you control your Digital Audio Workstation (DAW) software from your iPad in various ways, such as a control surface or a virtual instrument.

eyoControl communicates with your DAW through the dedicated eyoControl Server running on a laptop or desktop Mac computer. The eyoControl Server lets you connect multiple iPads running eyoControl to play virtual instruments alltogether on the same DAW. eyoControl supports most DAW software such as Logic, Cubase… Check the blog for news about eyoControl.

eyoControl is available to purchase from the iTunes App Store for $6.99 USD.