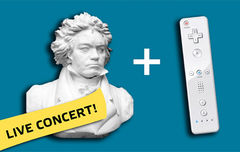 The Fauxharmonic Orchestra has begun an ambitious project to perform all nine Beethoven symphonies live in concert: Beethoven Digital Symphonies.

First, Mr. Smith painstakingly crafts the performance of the work using the same computer software and digital orchestral samples commonly used by top film music producers. The goals of the process are exactly the same as that of an orchestra in rehearsal. Mr. Smith utilizes all of the knowledge he has gained through a lifetime of musical study and experience to shape the digital samples into “recordings” that even experts interviewed by the Wall Street Journal have been unable to distinguish from “real” performers.

Next, the magic of the Fauxharmonic’s innovative technology lifts the performance out of the province of the music studio and into the concert hall. Using specially programmed video game controllers from the Nintendo Wii gaming system, Mr. Smith is able to control the Fauxharmonic’s tempo, balance, and dynamics in much the same way that a conventional conductor leads live musicians.

Paul will be using Vienna Symphonic Library’s Vienna Instruments for the performance.