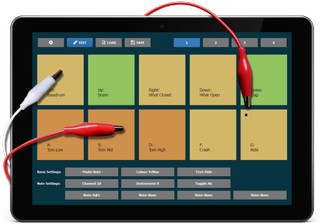 FeelYourSound has announced MidiMidi, a MIDI software for use with the MaKey MaKey invention kit that allows you to turn everyday objects into touchpads.

Have you been playing around with the idea to buid your own MIDI controllers or MIDI drumkits? There might be a new software and hardware combination around that can make your gear ideas come true.

feelyoursound.com has released MidiMidi, a software that turns the input of the successful Kickstarter project MaKey MaKey into various kinds of MIDI data.
MaKey MaKey connects to your computer via USB and presents itself as a standard keyboard. But instead of using the usual keys you can connect any conductive material like fruits or metal to the small platine. MaKey MaKey will transform each touch event into a key press like “space”, “left arrow”, etc.

MidiMidi by feelyoursound.com is 100% compatible to MaKey MaKey and turns its’ gaming orientated standard keys (W, A, S, D, Space,…) into MIDI notes, MIDI chords and MIDI controller values. Ten keys can get remapped to send the new data to synthesizers or other software, four banks are available to organize
your settings.

MidiMidi for Windows is available to purchase for 19 EUR / $27 USD.