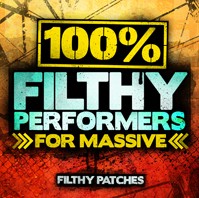 Sounds To Sample has introduced 100% Filthy Performers, a soundset for NI Massive by Filthy Patches.

Hopefully the next Massive update comes with a few gallons of Purell, because Filthy Patches latest set of presets is could be their most repulsive yet. (And yes, that’s a good thing.)

100 brand new presets with 8 macro controls, all synchronized to a moomba-rific 110BPM, 100% Filthy Performers is the perfect (yet revolting) patch pack that will instantly increase the defilement factor in your next electro, dubstep, or glitchhop production.

The soundset is available to purchase for 15.80 EUR.