Elixir is a novel kind of program limiter carefully designed to accomplish a truly pure natural sounding result without changing the nature of the audio material and its timbre, presenting none, or effectively reduced, conventional limiting “pumping” effects even during heavy processing.

Intended to fulfil the requirements of the broadcast, post-production and mastering industry, Elixir provides real True Peak output level in accordance with the ITU-R.BS 1770 and EBU R128 norms, and for surround/multichannel operation Elixir provides up to eight channels of simultaneous processing. 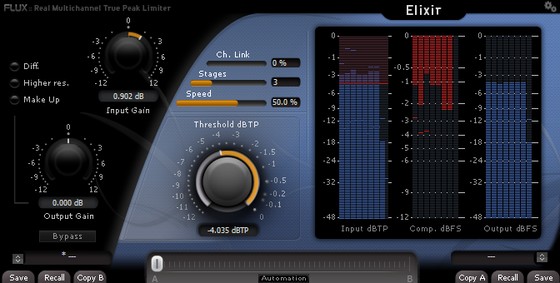 Elixir for Windows and Mac (VST/AU/RTAS) is available to purchase for the introductory price of 99 EUR (regular 149 EUR). AVID AAX compatibility expected during Q1 2012.