Focurite has announced that its RedNet interfaces will link a new recording studio, radio station, four mix/post production suites and 18 computer-lab workstations together into a seamless networked learning hub at the New Convergent Media Center at Capital University in Columbus, Ohio. 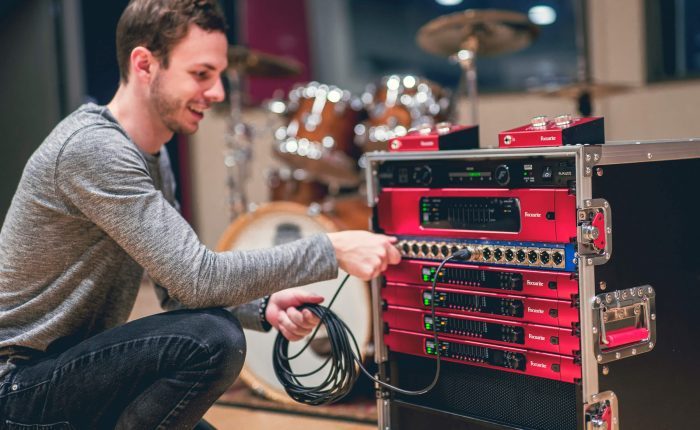 Capital University in Columbus is the oldest university in Central Ohio and is one of the oldest and largest Lutheran-affiliated universities in the U.S. Capital University is known for its diverse undergraduate and graduate programs, including its Conservatory of Music, communication and media degree programs, with renowned faculty and diverse majors such as Music Education, Performance, Music Technology and Music Industry. The school’s media technology programs are scheduled to be brought together for the 2017 spring semester under a single roof, at the new Convergent Media Center (CMC) there. And all of the facilities, including a new recording studio, four mix/post production suites, 18 computer-lab workstations and the new home of the school’s WXCU Radio, will be linked together using a large contingent of RedNet Dante™-networked audio converters and interfaces from Focusrite. In fact, RedNet was an integral part of the CMC plan from its inception over a year ago, with a fully dedicated Dante network using solely RedNet devices to connect all of the studios and facilities.

The RedNet interfaces are being sourced and installed by the Columbus office of leading integration firm Soundcom Systems. Capital University’s new CMC will use a RedNet 2 and RedNet 5 in its new recording studio’s ProTools HD setup; each of four new mix/post production suites will be fitted with a RedNet 1 eight-channel A-D/D-A unit and a RedNet PCIe card, which links an audio computer to the rest of the network via a GigE switch; a RedNet 1, two RedNet 2 16 channel analog I/O and four RedNet MPR8 mic preamps and a 128-channel RedNet PCIe card, which can be connected to Mac or PC, are in a rolling rack that will be available to all of the CMC’s rooms.

In addition, Focusrite products are used throughout the CMC, including a Focusrite ISA828 interface unit in the recording studio, and 18 Scarlett 2i2 USB audio interfaces and Novation Impulse 25 USB MIDI controlled keyboards in the CMC’s 18 computer-lab workstations, which will also share a new Focusrite Red 4Pre dual Thunderbolt 2 interface for a standalone workstation.

“The integration of a RedNet system has been part of the plans since day one,” comments Chad Loughrige, Head of the Music Technology Area at the school and an Assistant Professor in its music-technology programs. “We look forward to all the amazing multidisciplinary opportunities this system will afford us in the building. With recording studios, labs, television studio, radio station, multimedia classrooms, and lobby areas connected to this system, we envision many unique uses of the system in the building.”

Loughrige notes that the CMC was intended to not only represent the state of the art today but also be capable of addressing the technology programs’ needs for years to come. “RedNet gives us an infrastructure that can take us into the future,” he says. “At the same time, it considerably expands what we can do with our media-technology programs. It supports the interdisciplinary vision we have for the CMC; I envision a scenario where musicians can perform in the television studio and have their audio sent to the recording studio for recording and mixing and then sent to the radio station for a live broadcast, all using the RedNet interfaces. And RedNet let us build a simple, robust and reliable network that eliminates the cumbersome copper cabling we used to use. We chose RedNet because it’s the only audio networking solution available that’s aimed for both live and recorded audio, and that can stand up to the 24/7 use that our teachers and students will subject it to.”

Loughrige adds that Focusrite products have long been a part of the media-technology infrastructure at Capital University, including Focusrite’s legendary mic pre’s and Scarlet and Saffire interfaces, so including Focusrite RedNet as an integral part of the CMC was a natural choice. “We stayed with what we knew works and works brilliantly,” he says. “We can’t wait till school starts in January.”