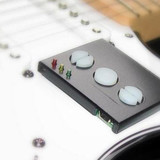 FreePlayer has announced the availability of FreePlayer Express, a universal kit that attaches to most guitars or basses with a simple adhesive pad.

Since FreePlayer Ltd. announced earlier in the year that they would be launching their motion-based guitar effects controller, it’s been a busy time: “We’ve been busy with fielding all the enquiries that have come in, helping and supporting our Beta users – and of course, developing hardware and software!” says a slightly frazzled Stuart Smith, Managing Director of FreePlayer Ltd.

The result is a brilliantly simple idea: one slimline box – the FreePlayer Express – can be attached to pretty much any guitar or bass, and connects to the outside world via USB (a wireless add-on is on the way). The Express contains a highly sensitive motion sensor which – as the demo clips on YouTube show – can be used to control pretty much any kind of effect, from simply merging in a delay or reverb through to ‘3-D – Wah’ filter effects, or even the kind of wild pitch-based effects that are possible with Saltline Audio Solutions’ ‘Son of a Pitch’ (bundled with FreePlayer). As they say on their website – ‘Move it, Shake it – it’s all possible!’. The Express hardware is rounded off with a tactile button array and a set of status LEDs.

Best of all, a planned firmware upgrade means that FreePlayer will be directly MIDI-capable – just plug it in to your audio workstation (PC, Mac or Linux), digital Amp, MIDI effects box or what have you, and you’ve got immediate control of your effects by movement – it’s as simple as that!

To capitalize on current success, the Express is available at a reduced price of EUR149 (GBP120, approx), while FreePlayer also boasts a dedicated LesPaul version built into a custom pickguard, with a Strat version and others planned in future.