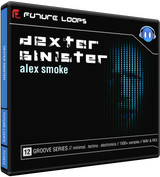 Future Loops has announced the release of Dexter Sinister, a new sample library by Alex Smoke.

Straight from their Groove Series comes Future Loops latest Release, Dexter Sinister. A thrilling collection of over 1500 loops and One-Shots that will defy your conception of contemporary dance music. Future Loops teamed up with Alex Menzies (aka Alex Smoke), an exceptional talent to emerge from the Glasgow music scene.

Since his first release Incommunicado in 2005, Alex gained the critics attention and praise, and continues to capture audiences with his remix works (Depeche Mode, Steve Reich, Junior Boys, Funk D’Void, Radio 4, among many ), albums and dj sets around the globe.

Dexter Sinister features 1.40GB (before duplication) of intricately crafted samples that range from minimalism and experimental , to techno and electronica; including over 1500 samples and loops in 90 BPM, 120 BPM and 128BPM , all organized by type; and even a few kits for NI Battery.

Dexter Sinister is available to purchase as a download for the introductory price of $39.96 USD (regular price $49.95 USD).