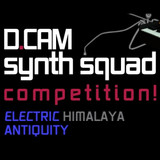 To celebrate the release of DCAM: Synth Squad v1.03 and the Himalaya: Antiquity preset pack, we’re running a competition with some fantastic prizes on offer!

To enter, first you need to watch the Synth Squad Recreations video, which contains rather cheeky versions of some classic synth-based songs produced entirely with DCAM: Synth Squad and Himalaya: Antiquity preset pack. All you have to do is name all 8 songs in the video!

The competition ends on July 1, 2010. Winners will be drawn at random from all correct entries.