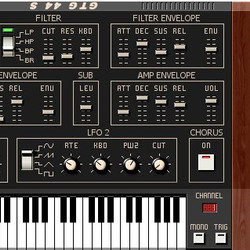 This synth was originally made for personal use only. It holds the functions I like and use mostly.

It may not meet everyone’s requirements though. But it’s a free synth and I hope you find it useful :-)

The GTG 44 S synthesizer is available as a freeware VST plug-in for Windows.