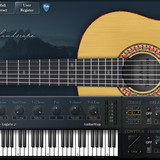 The Poetic Guitar series consists of three acoustic guitar plug-ins and PGL is one of the Nylon guitar VSTi’s. Compared with the H.E. Audio Acoustic Guitar Steel, PGL has achieved a higher level of design, technique, GUI etc.

The full name of PG8 is Poetic Guitar-8 Strings. It is the first plug-in of eight strings classical guitar worldwide, which will be released officially on September 20th, 2010. The range of eight strings guitar (A0-B4) is much wider than six strings (E1-B4), which can play more vivid music of classical guitar, and become more and more popular within famous guitarists.

PGL and PG8 are available to purchase as VST instrument plug-ins for Windows, priced at $99 USD / 79 EUR each.