Hal Leonard has released Rikki Rooksby’s The Songwriting Sourcebook, a book which reveals how to turn chords into great songs. 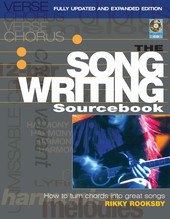 Originally published in 2003, and now revised and updated, The Songwriting Sourcebook is the latest entry in Rooksby’s bestselling How to Write Songs series. This easy-to-use book is designed to help musicians write better songs by explaining the art of writing effective chord sequences.

In The Songwriting Sourcebook’s 10 sections, Rooksby shows how three and four chords can lay the foundation for a simple song, and how to move on to progressions using five and six chords. He shows how to give chord sequences additional color by adding chords that are not strictly in key, as well as taking progressions into new territories by changing key. He shows how to write in major and minor keys and how to fine-tune the color of chords by understanding the emotional potential of sevenths, sixths and ninths.

The Songwriting Sourcebook is available to purchase for $24.99 USD.