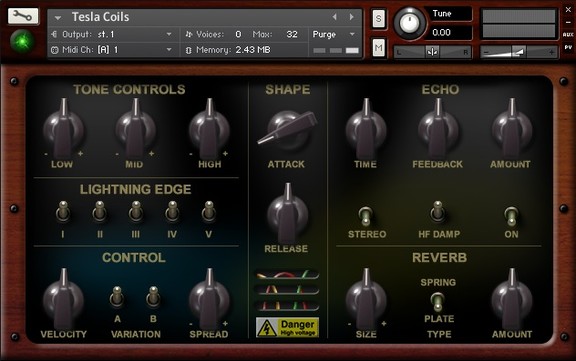 Giant, sparking and rasping generators of electricity up to 1,000,000 volts as they discharge to easy or a nearby conductor. You’ve probably seen the spectacular videos on YouTube.

Now, laying one’s hands on a Tesla Coil (and then recording it well) is tricky so we decided to recreate the sound on the studio’s modular synth… And then we wrapped all that up in a retro looking GUI in Kontakt.

The result is an electrical cacophony of sparking racket. It can be played chromatically like many of the musical Tesla Coil events you might have seen on YouTube. Not an obvious choice of instrument for mainstream music and don’t expect smooth pads, funky, hip-hop, trip-hop or dubstep basses, leadlines (well… maybe) but it’s damned good fun and ideal for more experimental stuff, IDM and all that.

M-Phazes The Vault Drum Library at The Drum Broker