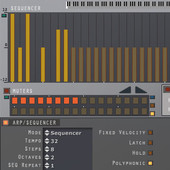 ARP is an advanced Polyphonic Arp and Note Sequencer with Scale Remapping for powerful sequencing possibilities. Sequences can be re-mapped based on the played note so for example a sequence can be forced to fit to the major scale. The idea behind this is to break away from the typical note sequencer where every key simply transposes the sequence, the ability to remap each note results in a much more creative sequence.

ARP for Windows is available to purchase for $20 USD.