TempoRubato has announced the release of new updates of its NLogSynth PRO and NLog MIDI Synth for iPad and iPhone/iPod touch. 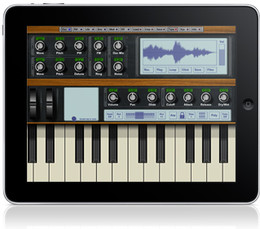 With new virtual Core MIDI, audio background operation and sync options including MIDI Clock & Korg’s WIST technology the updated NLog Synths will ground-break new and innovative ways for musicians to work with iOS devices. With now being able to interconnect apps running in parallel on the same device, we believe that iOS musicianship will reach a new level.

You can now play NLog Synths from controller apps like Audanika’s SoundPrism running on the same iOS device connected via virtual Core MIDI. In combination with NLog’s professional grade synth engine new exciting ways of app interaction and workflow are created for iOS users. Other controller apps like polychord by Shoulda Woulda Coulda or sequencer apps like Genome by White Noise Audio are supported as well.

Further, TempoRubato has implemented new synchronization options for its NLog synths. MIDI Sync in slave mode is supported for Core MIDI apps running in parallel on the same device like MoDrum by finger-pro, FunkBox by Synthetic Bits or Molten by One Red Dog Media as well as for synchronization with external MIDI devices like hardware drum boxes or connected DAWs like Apple’s Logic or Ableton’s Live.

The updates are scheduled for release in the iTunes App Store on Friday, September 16th.