With such a wealth of musical and sound design experience, Boddy decided to release his sample productions independently under the ‘Waveforms’ brand, which has already released four titles – Airwaves, Beatalogue, Drumalogue and Radiophonica. Waveforms delivers unique and focussed sample packs, all produced using Boddy’s collection of rare and vintage analogue equipment. 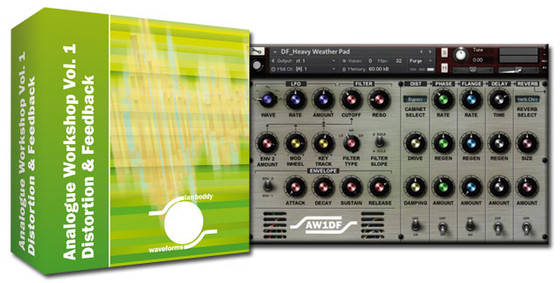 Boddy has been hard at work in his sonic laboratory and the result is ‘Distortion & Feedback’, the first in the brand new series of ‘Analogue Workshop’ sound libraries. Each volume will focus in on one aspect of analogue sound design possible with modular and vintage synthesisers.

Ian BoddyEach of the 300 samples in this library uses some form of either audio or control voltage distortion, feedback or general sonic ill treatment. A custom designed graphical interface has been scripted in Native Instruments Kontakt to provide even more variation and programming options. This is rounded off by a set of impulse responses for the convolution reverb, taken directly from analogue modules such as spring reverbs and bucket-brigade delays to further enhance the overall sound character.

The sounds and patches included in this library range from earth shattering drones, twisted pads, piercing modulations and weird transmissions to eerily haunting feedback oscillations. The one-shot section contains a range of crunchy, nasty, throbbing short percussive sounds and FX that can be used to spice up any drum kit or add impact to key moments in a musical composition.

There are over 500 Kontakt 4 format patches available which use the new custom designed GUI. They are grouped into two basic categories, raw and untreated. The GUI itself is split into two halves. The left containing the synth shaping controls whereas the right comprises an audio effects chain for maximum tweakability.

Analogue Workshop Volume 1: Distortion & Feedback is available to download now exclusively from Time+Space at an introductory price of £29.95 GBP for one month, after which the price will raise to £34.95 GBP. A free taster pack is available.