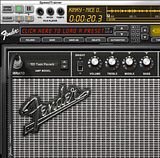 With a collection of 45 pieces of gear collected from the most sought after classic and modern Fender® amps (including the ’65 Twin Reverb®, ’57 Deluxe™, ’59 Bassman® LTD, ’64 Vibroverb® Custom, Super-Sonic™, Metalhead™ and many more), cabinets, stomp boxes and rack effects, AmpliTube Fender® sets a new standard for software amplifiers.

From guitar to bass, from Country to Blues and Rock, Punk to Metal, whatever style you play, AmpliTube Fender® is the only amp suite that gives you the world’s most influential guitar and bass tones right on your desktop.