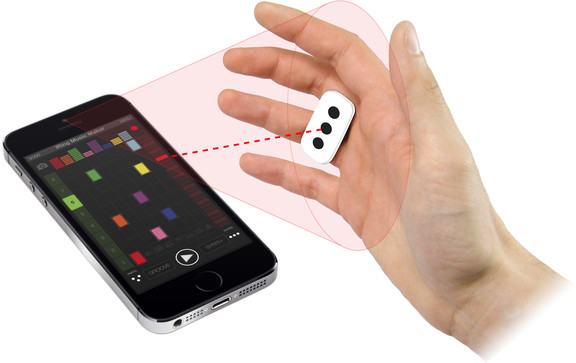 Now musicians, gamers, and more can trigger sounds and control effects and other parameters of their favorite apps, in real time, using hand position, freeing them from touching the screen!

iRing utilizes a wearable ring with identifiable markers, the mobile device’s front-facing camera, and advanced computer vision with highly-optimized recognition algorithms built-in to an app, to determine the precise positioning of the ring markers. The device camera picks up the positioning of the ring patterns and the apps convert that information into music commands for dedicated app or MIDI information, which any compatible music app can read. This means that a user can now operate up to six controllable music parameters in their preferred music apps with one or two hands gestures.

iRing will cost $24.99 USD/19.99 EUR (exc. taxes), and will be available in Q1 2014 in three colors (white, green and silver). Pre-orders are already available on the IK Multimedia online store and selected stores. iRing FX/Controller and iRing Music Maker apps will be available as free downloads from the App Store.