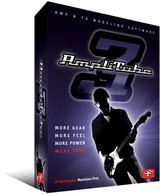 IK Multimedia is now shipping AmpliTube 3, a massive upgrade of the guitar and bass tone gear-modeling software for Windows and Mac.

There’s a new king in tone, and its name is AmpliTube 3. A massive upgrade of the leading guitar and bass tone gear modeling software, AmpliTube 3 raises the industry standard of sound variety, realism and creative power. If your recording or playing “rig” is lacking in that rich, lush expressive analog warmth, then you need to check it out. With over 160 precisely modeled pieces of vintage and modern gear available in one package, AmpliTube 3 is the ultimate tone gear collection for the player/producer/engineer suffering from tone angst.

AmpliTube 3 is now available to purchase for PC and Mac (VST/AU/RTAS):

Thanks for the kind words. We definitely will have an update as well as some new models in the future! Stay tuned.

Dynamic is the key
Amplitube 1 got the best dynamic from this time
Amplitube 2 sounded worse than 1 (like Metal)
Amplitube 3 sound better than 2 :D

I loved my tonelab, amplitube 1 and the studio devil products ;)

But, about effects, i will use my computer for sure (effect loop or headphone out) ;)

I’ve read a lot of negative comments on different forums concerning AT3, but for me it sounds pretty damn good. The latency issue has been fixed, and the distortion FX no longer sound fizzy.

A lot of people complained that the name branded FX do not sound *exactly* like the real pedal, but I think they’re close enough. Getting it perfect is probably next to impossible unless they simulate all the IC’s precisely in software – which obviously isn’t going to happen. I mean it could happen, but not on their budget and their time restraints.

There is one point I do agree on with negative comments – it’s a massive memory hog of an app. It’s like my quadcore cpu has a heart attack in the time it takes AT3 to load. I can’t imagine running it on any lesser CPU. And it has no 64bit version yet.

The variety of amps and pedals is staggering. It’s like they tried to do everything every other guitar sim does. I’ve had AT3 for a few days and I really haven’t even scratched the surface on the various possibilities – probably because there’s so many it’s nuts to think you can go thru them all, so I gave up that idea completely. I’ll get to it when I get to it and if I don’t then that’s fine too. Normally I’m obsessed with running thru all presets, but not this time.

However, AT3 does crash quite a bit – I can crash it on command by clicking the popup menu to select a preset and while the menu is open hit the escape key a few times and Reaper does a nose dive every time. So I am expecting a v3.01 update soon.

Guitar amp sims are really maturing: guitar rig4, AT3, thd, mellowhead, studio devil, and even several freebees are all fine apps. A few years ago I hated all amp sims, but now they all sound ok (& even sound great) and the advantages of all the slick features that could only be done in software actually make it better than a real amp experience sometimes. I can just load an amp sim and have stereo output, all kinds of pedals, whatever FX I want, including things that no real amp has ever had, and it sounds good without blowing away the neighbors. I hardly every turn on a real amp any more unless I’m jamming with others.