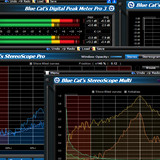 We have just released new versions of our freeware and analysis plugins that fix several issues (mainly on Mac and Windows x64). For commercial plug-ins, it also improves the demo version and makes it more user-friendly. We recommend you to upgrade to these new versions. You can check the release logs for details.

Changes in the updates