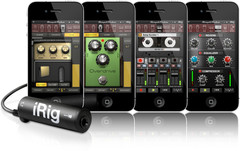 IK Multimedia has released AmpliTube 2 for iPhone, a major update to the leading guitar software for iPhone.

AmpliTube 2 for iPhone offers incredibly realistic tones and effects, full multi-track recording capabilities and an advanced practice tool – all in one convenient mobile app, from the leaders in analog gear modeling software for professional recording studios. Use the AmpliTube iRig interface adapter to connect your guitar to your iPhone/iPod touch/iPad and you are ready to rock!

New in AmpliTube 2 for iPhone

AmpliTube 2 for iPad is currently in development with even more powerful features and will be announced shortly. Current iPad only users are advised to wait for the dedicated version before going ahead with the in-app purchase of the iPhone version.