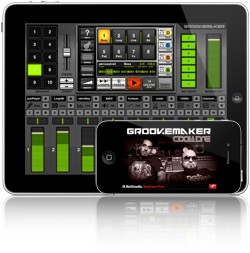 With over 1 million downloads since its release over a year ago, GrooveMaker has become one of the top loop remixing application for the iPhone, iPod Touch and now the iPad. The new installment, GrooveMaker Cool & Dre, allows you to create professional, full-length songs in minutes, with its unique combination of advanced remixing software and high-quality included loops’ sound content.

GrooveMaker Cool & Dre for the iPhone/iPod Touch is priced at $7.99/€5.99, the iPad version is $9.99/€7.99. Both are available in the Apple iTunes App Store. A fully functional GrooveMaker FREE version is also available.