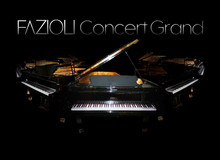 Commanding a powerful and magnificent sound, this imposing hand-made Fazioli ten foot Grand Piano was created by the makers of world’s most expensive grand pianos, and is considered by many to be the Elite of all grands.

Finally, an epic grand piano has been imperfectly sampled with warmth, without sterility. Most grand piano libraries tend towards having a sterile sound. The Fazioli Concert Grand offers an imperfectly sampled epic sound, with a raw warm, and rich tone not heard in other commercial grand piano sample libraries. The sound of this piano is deep, full, and epic, with real performance elements that can’t be simulated using synthesis or modelling. The Fazioli Ebony Concert Grand is desirable for situations where you want the grand, expensive sound of a real grand piano.

The Fazioli Concert Grand is available to purchase in 4 versions in EXS24 and Kontakt format (NOT for Kontakt Player):