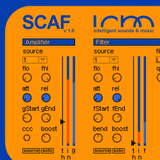 SCAF consists of a filter and an amplifier section. Both can be controlled by any track in your project. The routing between the tracks is done via internal host-independent side chains.
The sections are independent so the filter’s cutoff frequency might follow the volume envelope of one track’s signal while an other track conducts the amplifier.

You set the start and endpoints for gain and cutoff frequency. So the amp section can work in compressing or expanding mode. And the filter can sweep from low to high frequencies or vice versa while the controlling signals volume rises from zero to full scale.

SCAF is available to purchase as a VST effect plug-in for Windows PC, priced at 32 EUR.